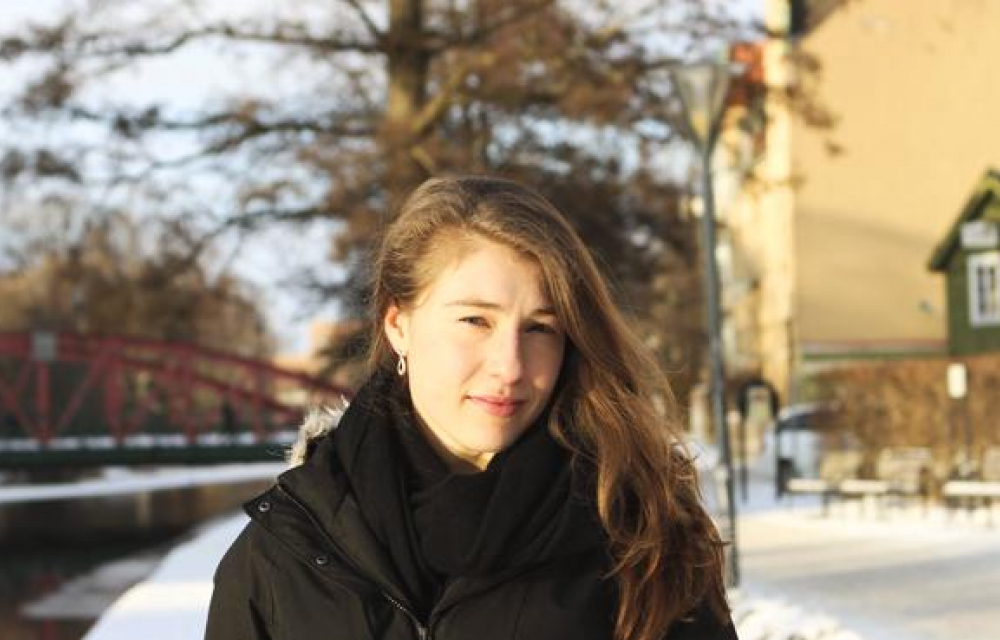 Miranda Andersson is happy with her life in Uppsala, and would like to stay.
Foto: Sigrid Asker

Rejected by the Migration Board

Sigrid Asker / webbred@ergo.us.uu.se / Nyheter / Publicerad 2018-02-12 10:29
She moved some money out of her account for safekeeping. This action turned out to be far from safe. American Master student Miranda Andersson received a decision of deportation.

Since Miranda Andersson moved to Uppsala from Atlanta, Georgia, in August 2016 she has learned Swedish, met a Swedish boyfriend and got a part time job at a communications agency in Stockholm. She is expected to finish her Master s degree in Digital Media and Society at Uppsala University in June, but now the Migration Board may ruin her plans to stay in Sweden.
– They sent me a letter in August saying that I had wrongly formatted documents. I resent them, and then I received a decision of deportation in November; either I had to leave the country in four weeks, or appeal their decision within two weeks to the Migration Board. Between the original application and the corrected one, I moved some money out of my account for safekeeping and then put it back in, Miranda Andersson says. nbsp;
I have coffee with her at Café Linné. During the interview, we switch between English and Swedish. Miranda Andersson, who has Swedish heritage on her father s side, didn t speak the language when she first arrived, but she is now not far from being fluent. Her plan is to stay in Sweden after graduation. nbsp;
– Uppsala is a beautiful town, with its cathedral and University. The Swedish summer is amazing. I’m really happy about my life here, Miranda Andersson says.
She is dismayed that she never had the chance to communicate with someone at the Migration Board prior to the decision.
– Once a mistake is made, the only option you seem to have is to appeal the decision, Miranda Andersson says.

People around Miranda have been very supportive, including her friends, family and coworkers. Other students have experienced this problem as well, including one of her classmates, a student from South Korea.
– I ve grown weary of having to spend a good amount of time and effort in pursuing this. I have appealed the Migration Boards decision to the Migration Court, and I am still waiting for them to make a decision, Miranda Andersson says.
The Migration Court turnaround time is said to be between 6 and 12 months, which means Miranda Andersson will most likely have enough time to finish her studies in Sweden. Luckily, the university has informed her that she will be able to complete her studies, regardless of what the decision may be.
– It s better that it happened now, and not during my first year in Sweden, she says.
Miranda Andersson s advice to foreign students is to read information from the Migration Board very carefully, and follow the rules to the letter. A small mistake can have serious consequences.

According to Lina Solander, officer at the International Office at Uppsala University, students facing obstacles with the Migration Board is an increasing problem. Not only in Uppsala University.
– The vice chancellor of Karolinska Institutet observed this in a blog post recently. It affects universities all over Sweden, says Lina Solander.
One palpable change over the last few years that she mentions, is that more students from countries like The United States and South Korea are being rejected by the Migration Board. Until now, they have barely had any problems being admitted to residence.
– This means this issue beats wide, says Lina Solander.
But after all, there’s a light at the end of the tunnel. From January 29, 2018, the Migration Board will change their practice, and no longer demand statements retroactively off foreign students applying for residence. The Migration Board will only demand supply history if indicated that it’s needed.
– It doesn’t help Miranda, unfortunately, but hopefully fewer students will have to interrupt their programs, says Lina Solander.