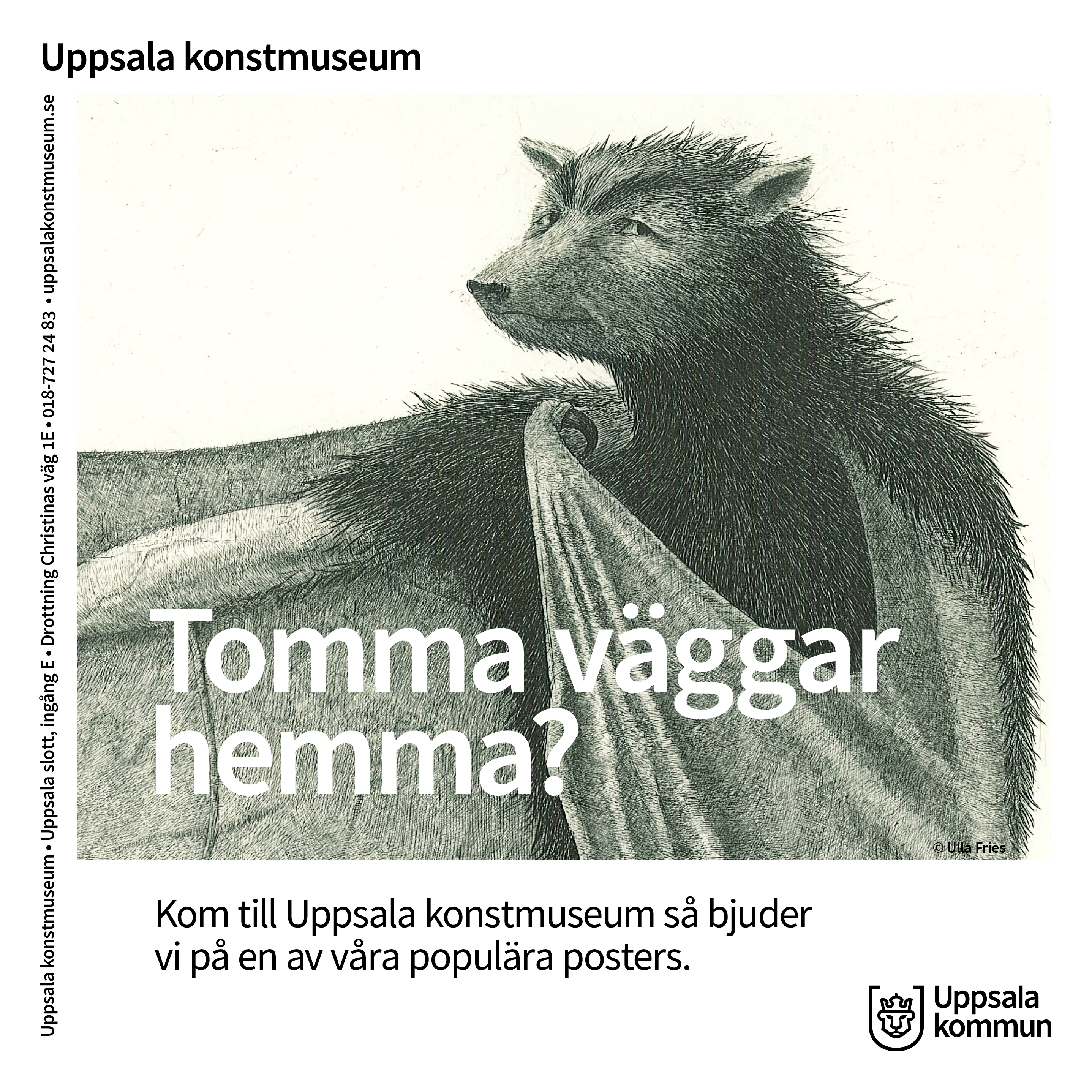 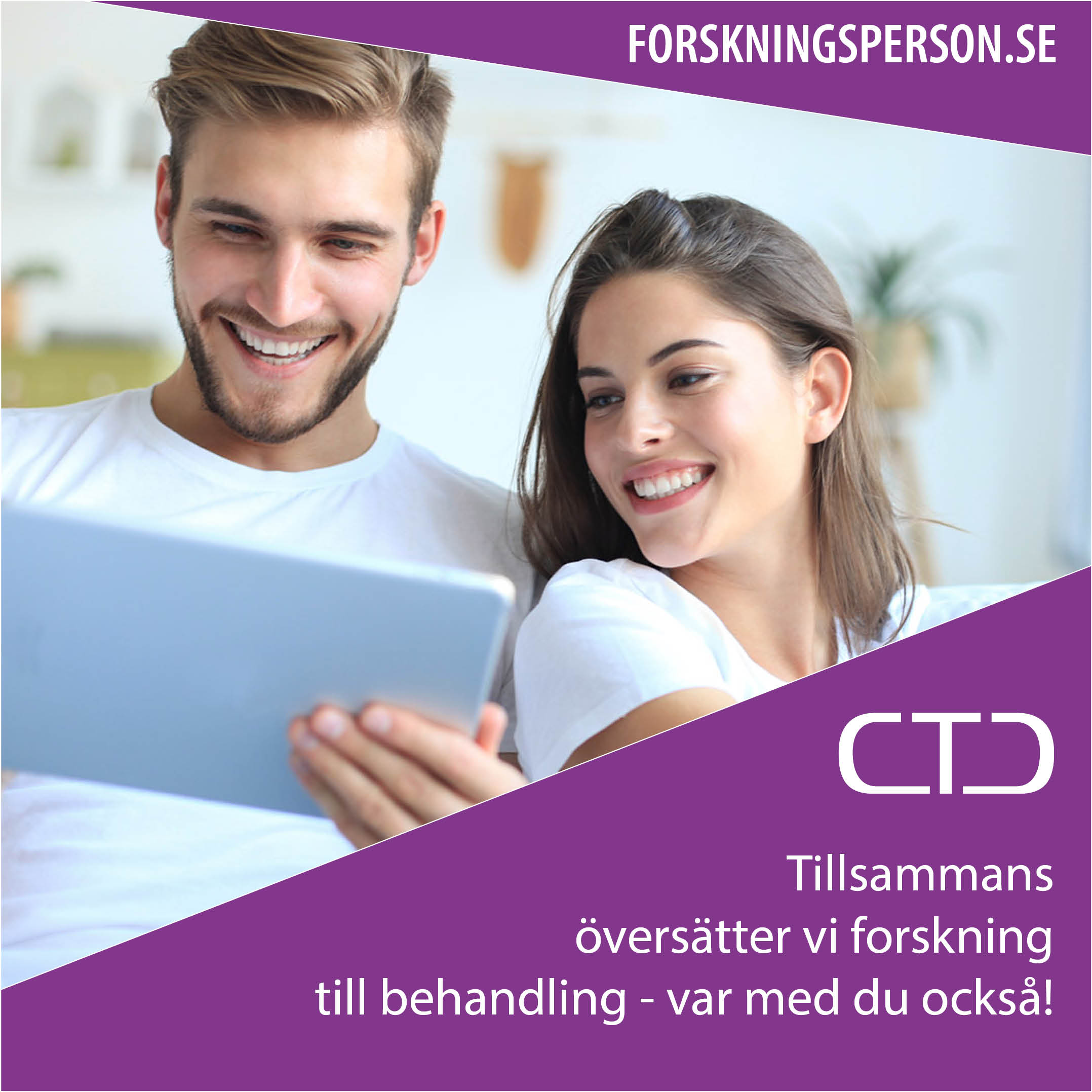 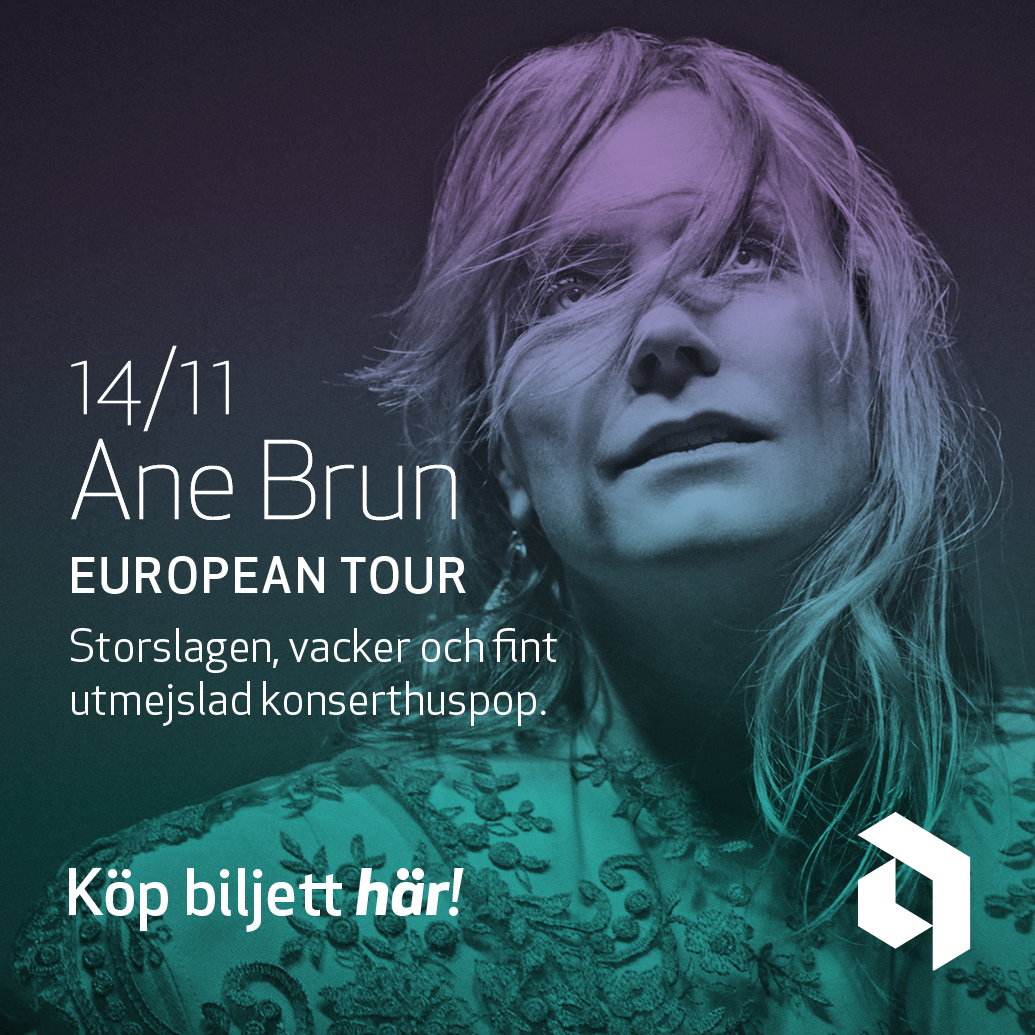 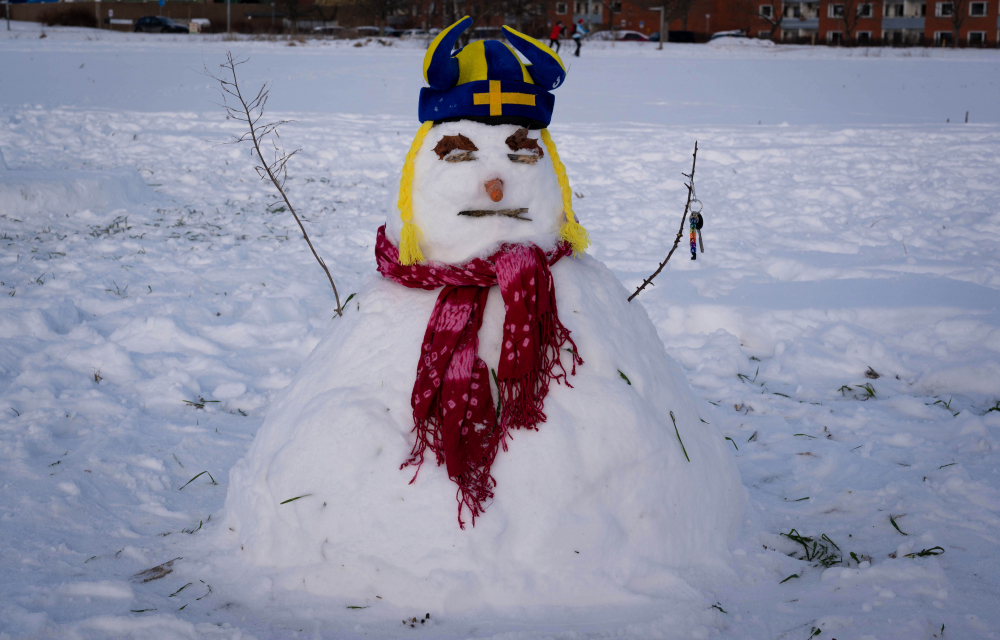 Foto: Hungover snowman
The quality of the snow wasn't optimal for building snowmen on Sunday, but with a sturdy base (and eyebrows) nothing is impossible!
Foto: Miriam Hauertmann

Linnéa Kalnins / Reportage / Publicerad 2021-02-17 10:42
This Valentine’s Day, students gathered in the fields outside Flogsta to make the most of the snow. Ergo paid a visit to the snowman building competition and talked about snow hippos, the walk of shame – and a secret dog who may or may not actually be called Secret. 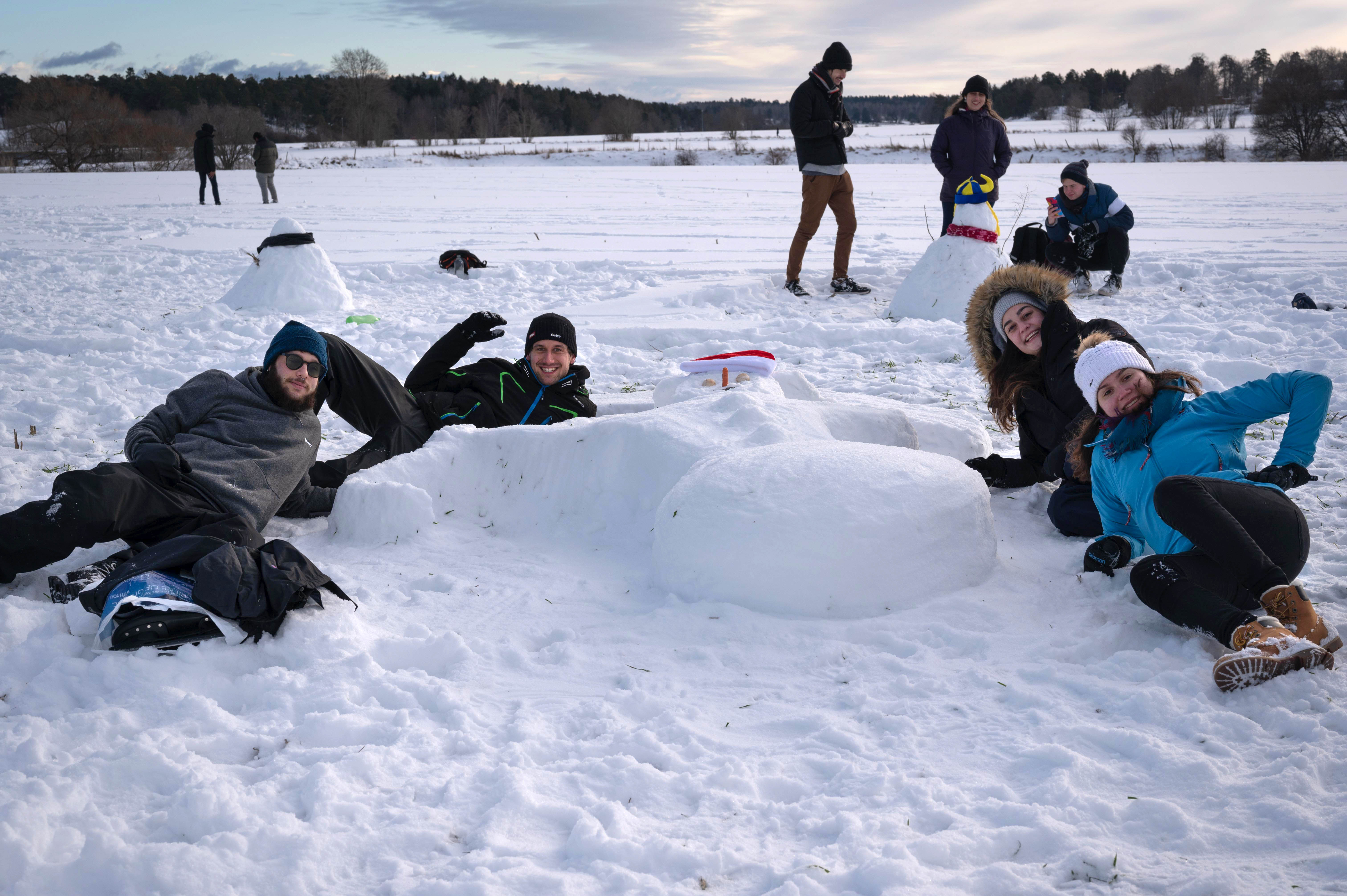 Paschalis, Mathias, Cristina and Lise got creative with the powdery snow and decided to build a lying-down snowman rather than an upright one.

Do you study here in Uppsala?

CRB: No, I live and work here, but I do online studies at the moment. I came here to enjoy life! It's better than in Spain right now.
MK: Everywhere is better than Spain.
CRB: This week they could start leaving their villages, but for one month you couldn't even leave your village. It's horrible. Only ten people are allowed at home...
LK: Six in France!
CRB: Six?!
LK: Yes, there is a cap at six. Everywhere.
CRB: Yeah, so... I love Sweden!

What was the inspiration behind your creation?

P: Next week it's most likely going to rain, and the temperature will rise. So our snowman is taking cover from the rain, because it will make him melt. And because it's difficult to build in 3D under these conditions and with this texture of snow, Matthias' idea was to build in 2D.
CRB: So it's 3D but lying down!
MK: He fell over.
P: We wanted to make it 3D...
CRB: ...but that was super hard to do. In the beginning, we had a lot of snow, but then we were like “guys, this isn't working”. We had to think outside the box!
MK: And now we're quite happy.
CRB: Yeah!

Does he have a name? 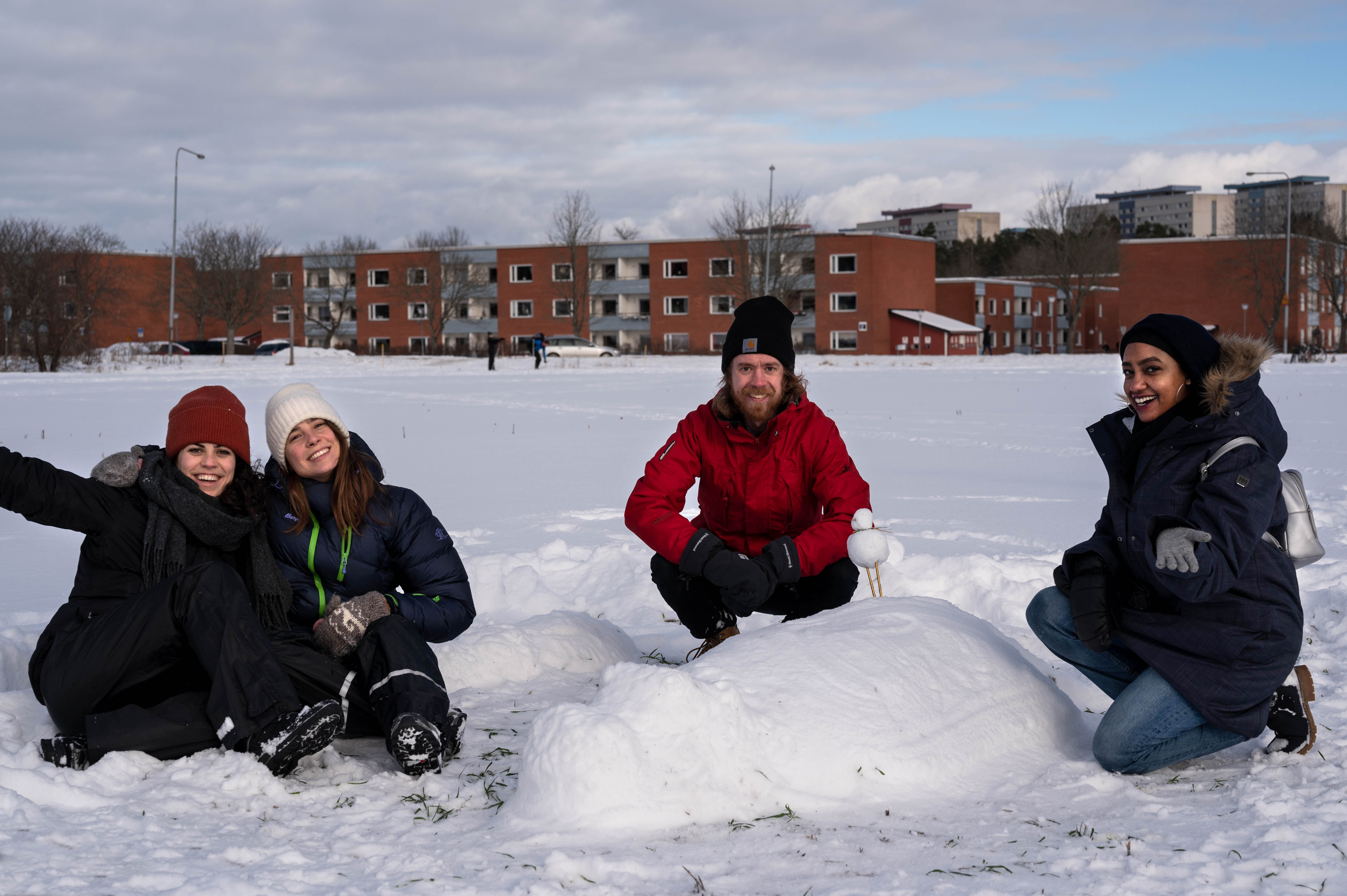 Clara, Lorea, Jöran and Lana's mermaid turned into a hippo with a cute bird companion on top.

How did you come up with the idea to make a snow hippo?

LJ: It was easier to build it horizontally rather than vertically. That's all. We were doing a fat thing, and we were like “oh, it kind of looks like a hippo!”
LA: And then there's the most innovative bird.
JM: I think that's what I'm most proud of!

You kind of decided to make it into a hippo as you went along?

LJ: It was going to be a mermaid, but it was too fat!

Does it have a name?

How come you decided to come out here today and build a snowman?

CL: It's the 14th of February and we're all single, so we thought that we had to do something rather than just stay at home. 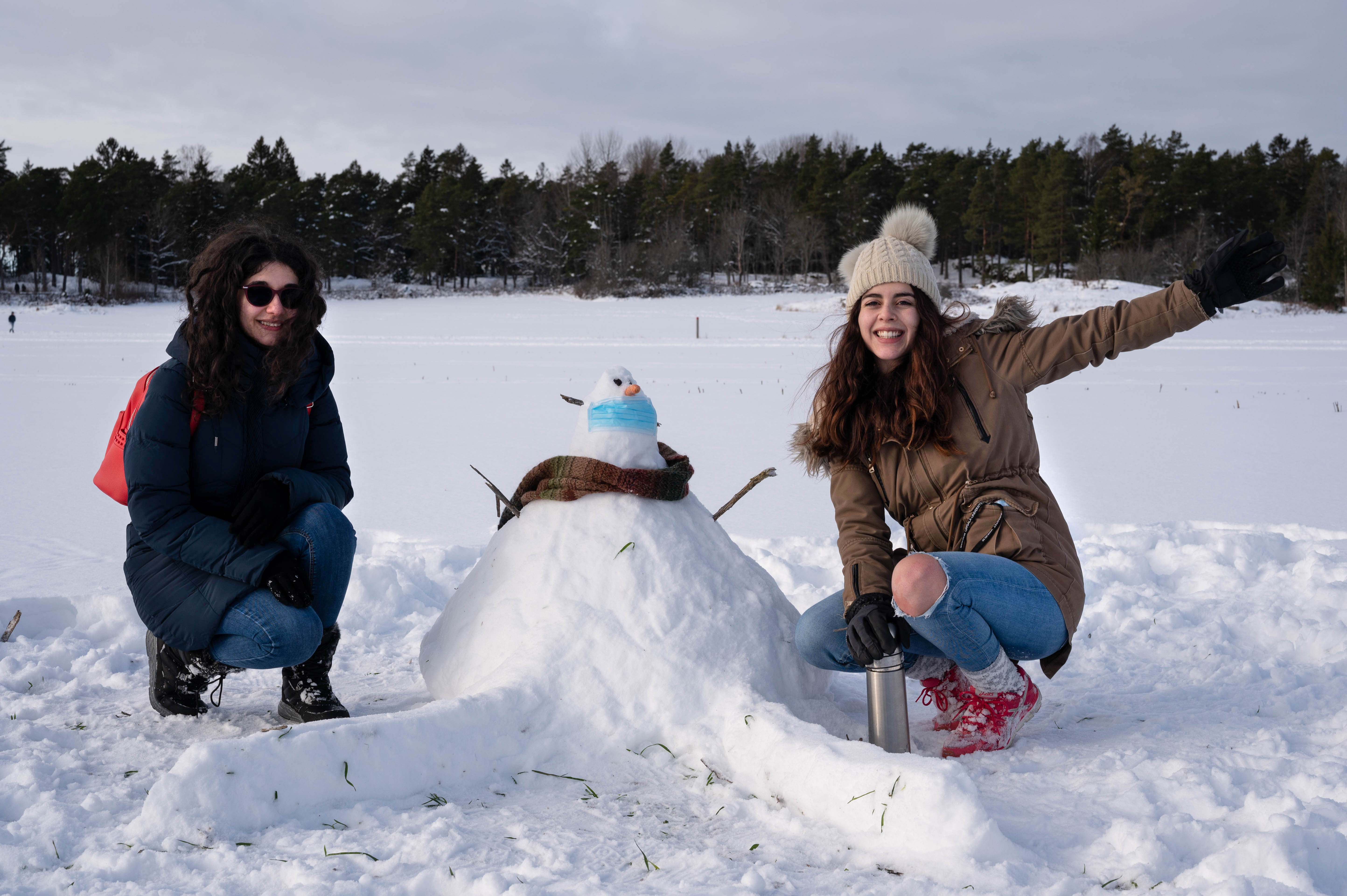 "Ugly Olaf" just sort of ...happened for Maria and Angeliki.

Does this guy have a name?

AS: Ugly Olaf or something...?
MO: Olaf Gustafsson.

Had you decided what you were going to make before you got here today?

MO: We hadn't decided. We started making a snowman, but the snow was too soft, so we made a big base and then the head kind of occurred later.
AS: Yes! Then it was decapitated... If you touch it now, it might fall off. Then we thought we would put the mask on it to depict the situation. 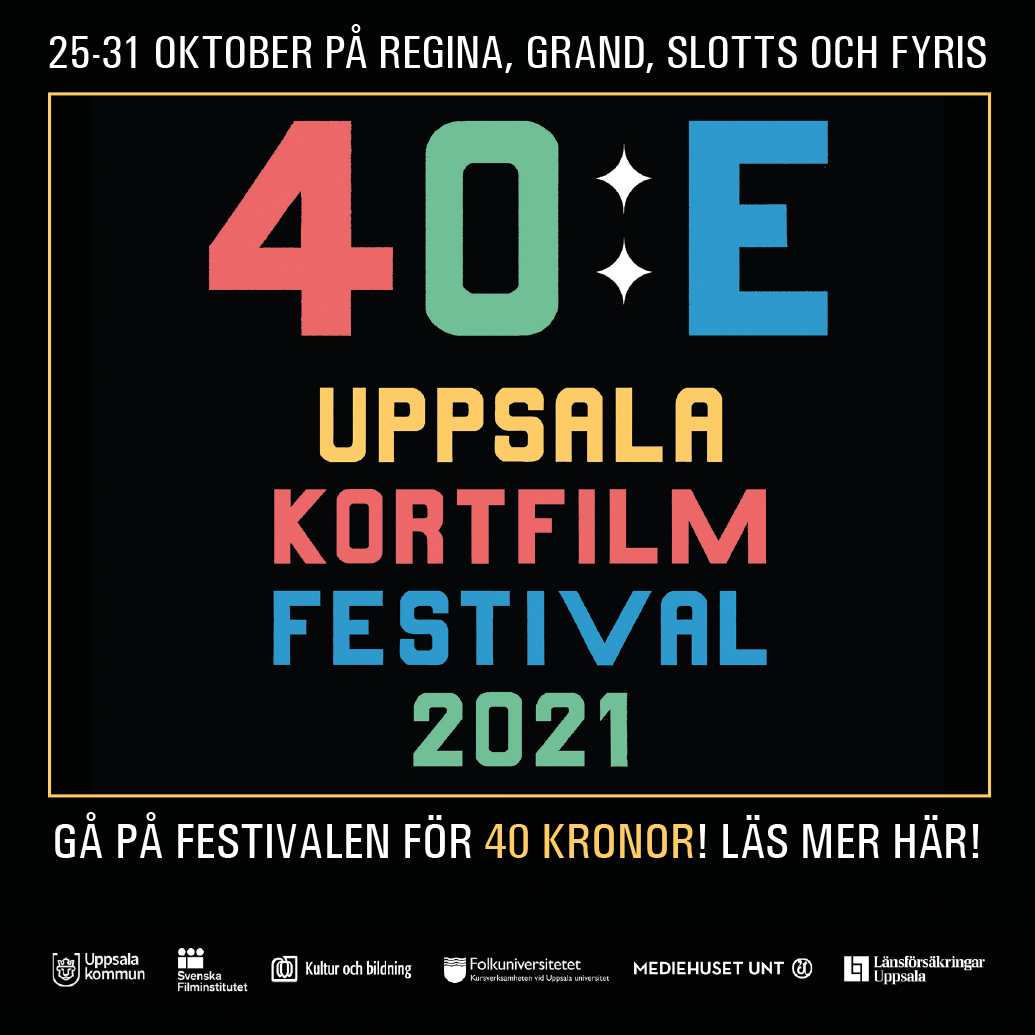 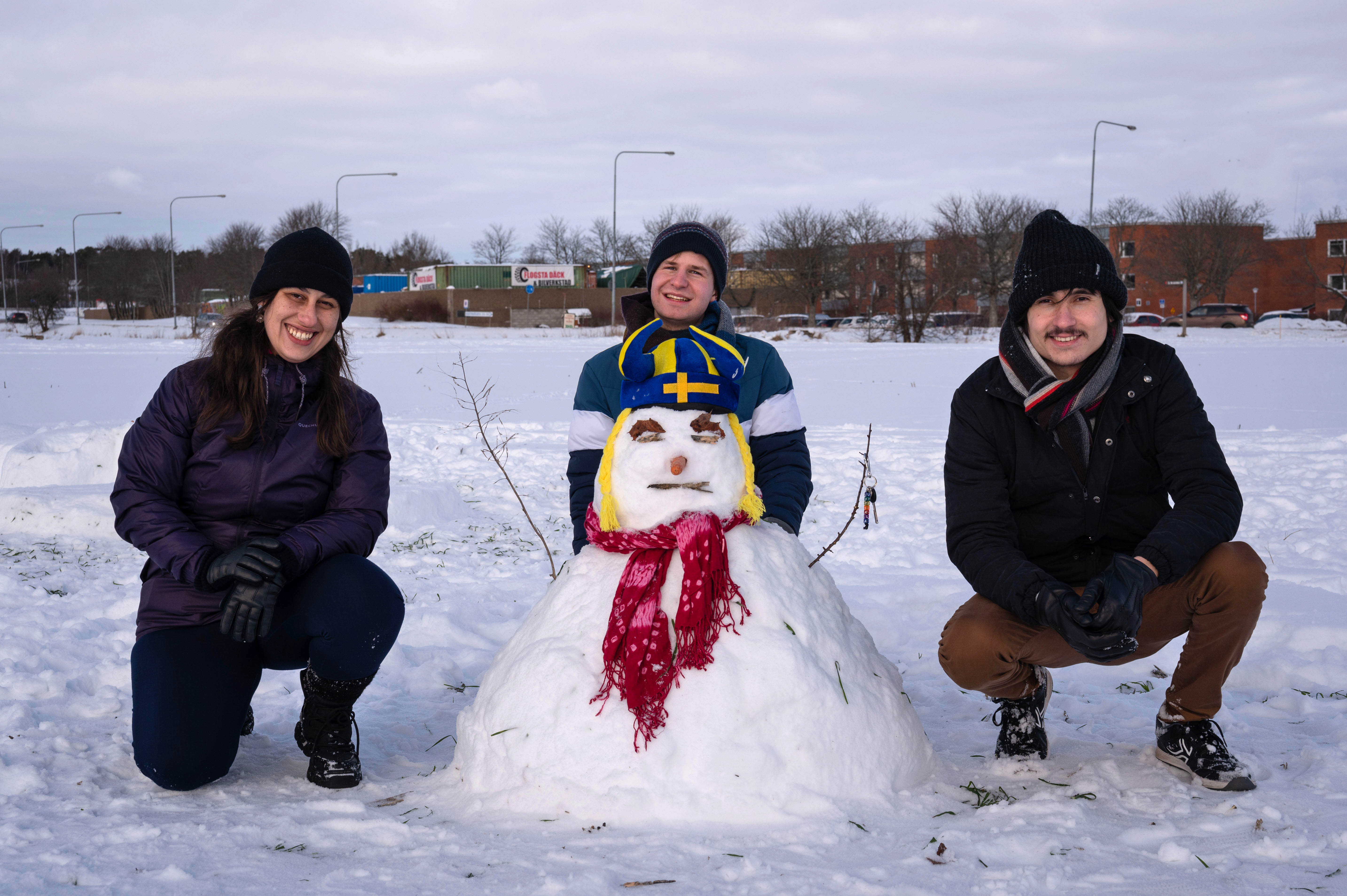 It's the first time Tassia and Ahmed have ever seen snow(!) so what's better than building a classic, albeit slightly hungover, snowman with a carrot nose and a scarf?

How did you come up with the design for this one?

WC: We wanted to go with rolling snow into a ball but that didn't work, so we sort of piled it on. And then somehow we ended up with a head! Although I'm not sure how... We just ended up with a head, and thought it best not to decapitate her. So we then decided to try and see if the hat fit, which it did, and then we just went with it.
AC: You brought a carrot!
WC: Yeah, I brought the carrot and Tassia brought the hat and scarf. And it's got some sort of drag make-up on.
AC: And she ended up with keys.

The keys – is she going somewhere?

TD: She's really hungover, as you can see from the look on her face. She's getting back home on the walk of shame, all like “I'm exhausted, I need to get to bed.” That's why she's not smiling, but she's pretty happy inside.

It's Valentine's Day. How come you decided to come here and build a snowman?

TD: I saw the event in a Facebook group. It's the first time I'm seeing snow so it's pretty magical. I like to play in the snow as much as I can, because when I go back home there won't be any. I have to enjoy it as much as possible!
AC: Same for me, it's the first time I see snow. There's no snow in Tunisia. 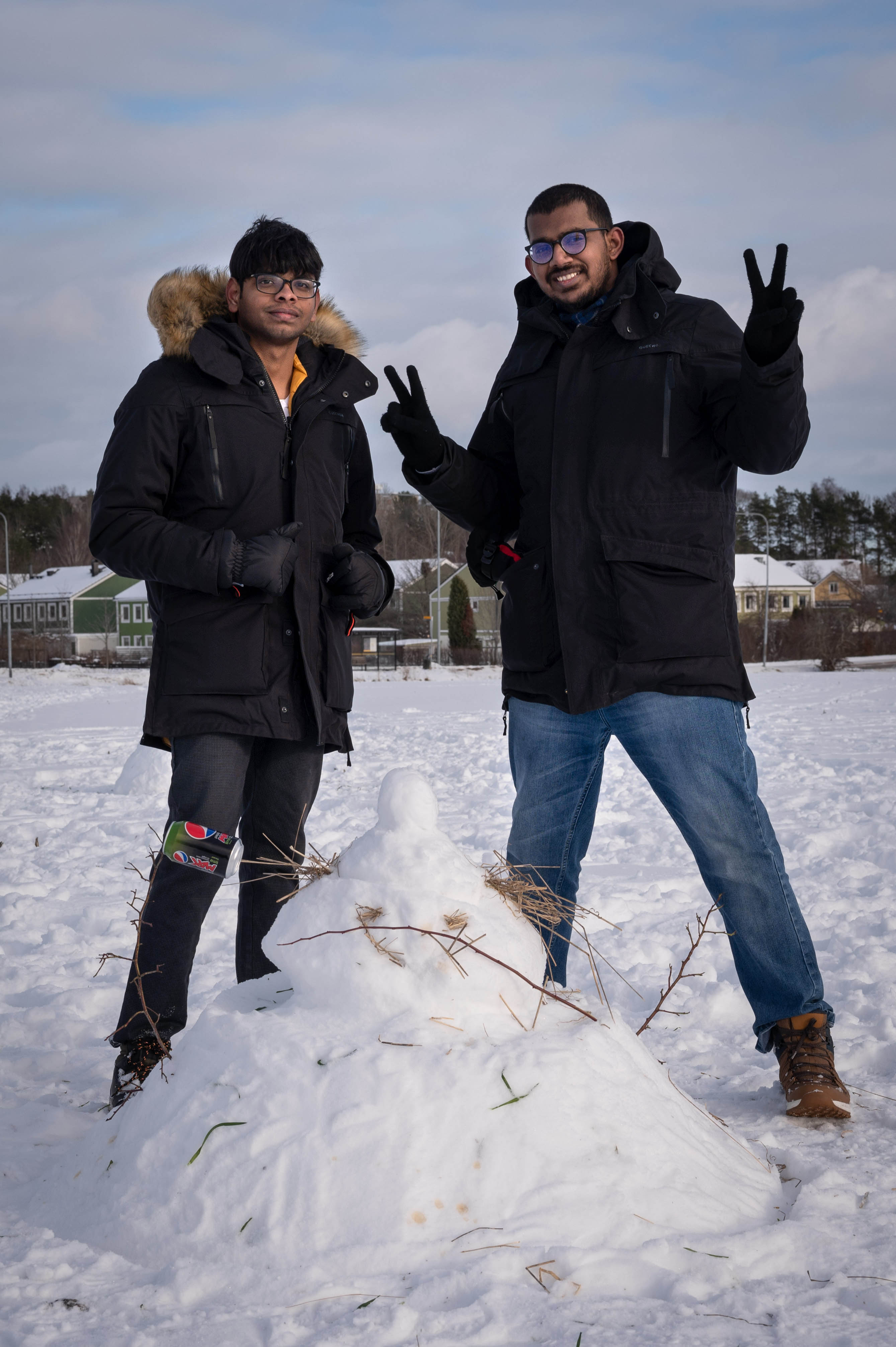 Nandhakumar, Sanjay and Anne Welter (who had left the scene before Ergo showed up) got specific with their snowman's backstory. Apparently he is going through a tough break-up.

“The Drunken Snowman,” you say this one is called. How did you come up with that?

SE: It's Valentine's Day, and we're single. Back in India, if you go through a break-up, we tend to drink a lot. So we thought that we'd create that. Actually, all the other nice snowmen you see around here? They're the nice social media stuff. This one is reality!

Did it take long to make this?

SE: At first, we didn't know what to do. But then we thought that we wanted to incorporate some Indian culture. Like break-ups and all that stuff. I don't know how break-ups happen here in Sweden – people probably move on faster than in India. Because in India, we grieve, we drink, we post things on Instagram.

How long after a break-up would it take until you could start seeing someone else?

SE: Usually it takes around a year, or so?
NN: Six months!
SE: Minimum six months!

Does that depend on how long you've been together?

SE: No, even if it's one-sided love - a guy who likes a girl but won't confess it to her - he would be grieving. I don't think you would have this concept anywhere in Sweden. In India, for example, a guy can be in the same college class as a girl he likes. She'll grow up, she'll get married and even have a baby with her husband - even then the first guy will be grieving. That's what this snowman has been through. That explains his face! 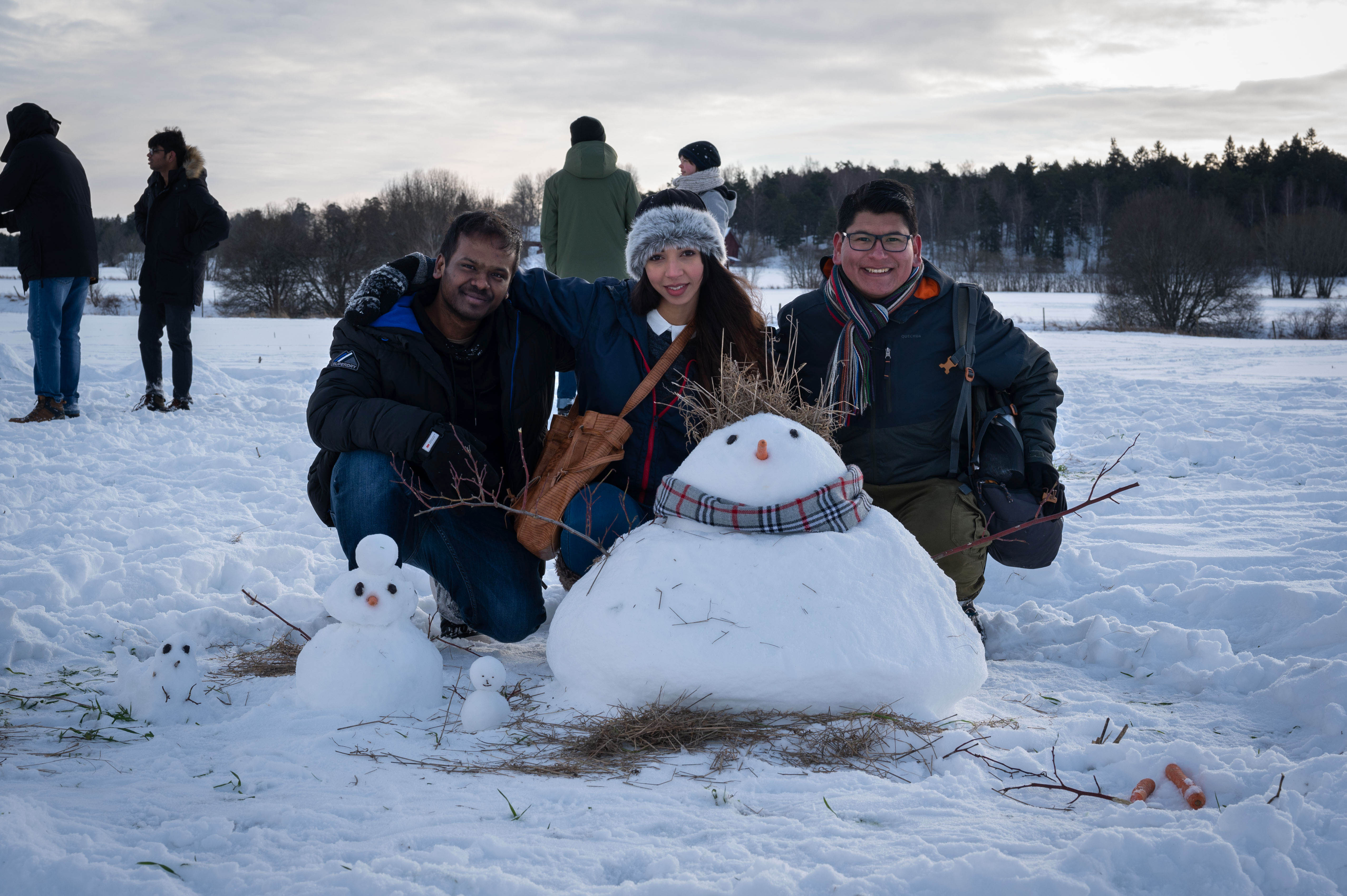 Amal, who initiated the snowman building event, has built a whole snowman family together with Guru and Israel.

Amal, how did you come up with the idea for the event?

AT: ‒ This is the first time I see snow and everyone in Flogsta was talking about snowmen. So I just thought “why not make a competition?” This would be my first time making a snowman, and maybe it would be the same for other people.
GMR: ‒ This was my first time as well!

Do the members of your snow family all have names?

Is its name Secret or is it secret?

GMR: ‒ It's Secret. The Secret Dog. (The reporter is still unsure about whether capitalisation is correct). 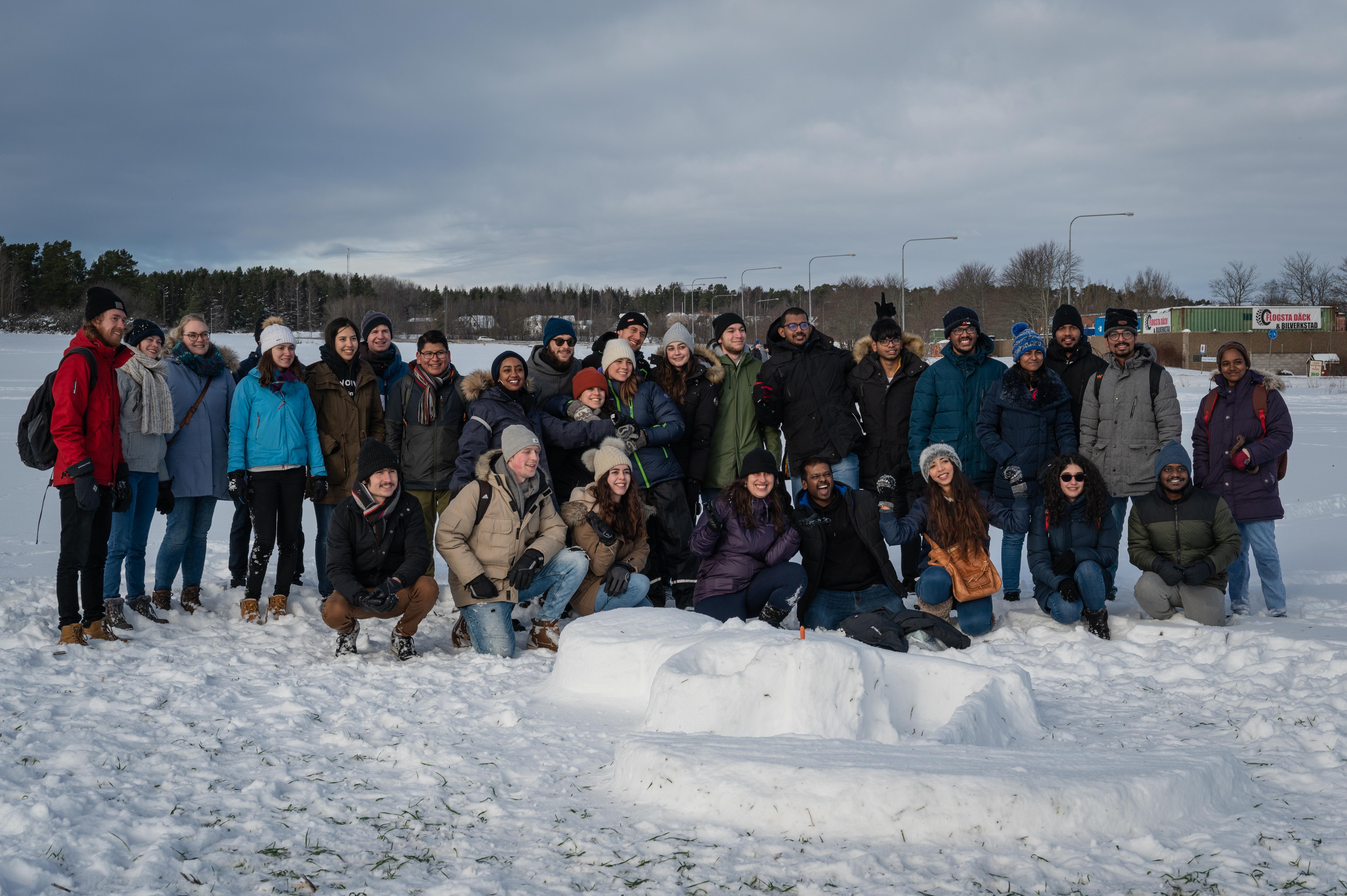 The Campus Garden is getting ready for harvest fest

Reportage
2021-09-14 13:35
The volunteers and driving spirits behind Uppsala University’s Campus Garden are preparing to host their very first…
Läs mer

Reportage
2021-06-09 11:27
Several students living in the Flogsta high rises have been plagued by bed bugs this past year. We sought to find out…
Läs mer